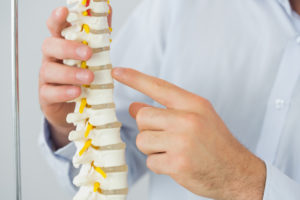 There are many injuries that come from car accidents such as bruising, whiplash, and broken bones. Similar to whiplash which happens in the neck, rear-end collisions can cause other significant injury to the rest of the spine. These injuries may include disc herniations, significant muscular strains, global misalignments of the spine and compression fractures.

Many assume that because they initially do not have any pain that they do not have any injury or damage to the area. During moments immediately after a motor vehicle accident as well even a few days to weeks after, there are natural hormones including Adrenaline surging that are released in the body and they may stick around for days to weeks. Bleeding, inflammation and swelling around damaged tissue will cause increased discomfort and pain as scar tissue begins to form. Scar tissue around disks and ligaments will prevent joints from moving to their full capacity and muscles to function at their full capacity. These restrictions tend to cause spinal and postural asymmetries as the body becomes tolerable of living and functioning with discomfort.

Chiropractic after an accident-

Chiropractors treat symptoms and injuries naturally without prescribing any medications as they focus on the integrity of the musculoskeletal system and its connection nervous system. This naturalistic approach means that there are no side effects that come with taking medications. A Doctor of Chiropractic will assess symptoms, misalignments and functional changes in the body after an accident as they treat the problematic areas which tend to be affected around the spine. When the body goes through trauma it adapts by creating scar tissue if soft tissue is damaged causing restrictions in movement of soft tissues in joint capsules or soft tissues. Whether its bruising, ligament damage inflammation it is always a good idea to have these injured areas looked at by a Doctor of Chiropractic.

Reaching out to a chiropractor will provide many benefits after injury. Typical treatment may involve Soft tissue therapy, Ice or Heat therapy, mobilization of upper and lower extremities but more importantly maintaining motion throughout all areas of the spine. You are likely to experience tension throughout your back and neck following a car accident whether it’s days or weeks later. In many instances Chiropractic works very well as a stand-alone treatment while sometimes it is a great compliment to physical therapy and or acupuncture.

Thanks to our friends and contributors from Koenig Chiropractic for their insight into treatments after car accidents.

About the Author : Dr. Matthew Gianforte

REASONS TO VISIT A CHIROPRACTOR AFTER AN ACCIDENT Jul 03, 2017